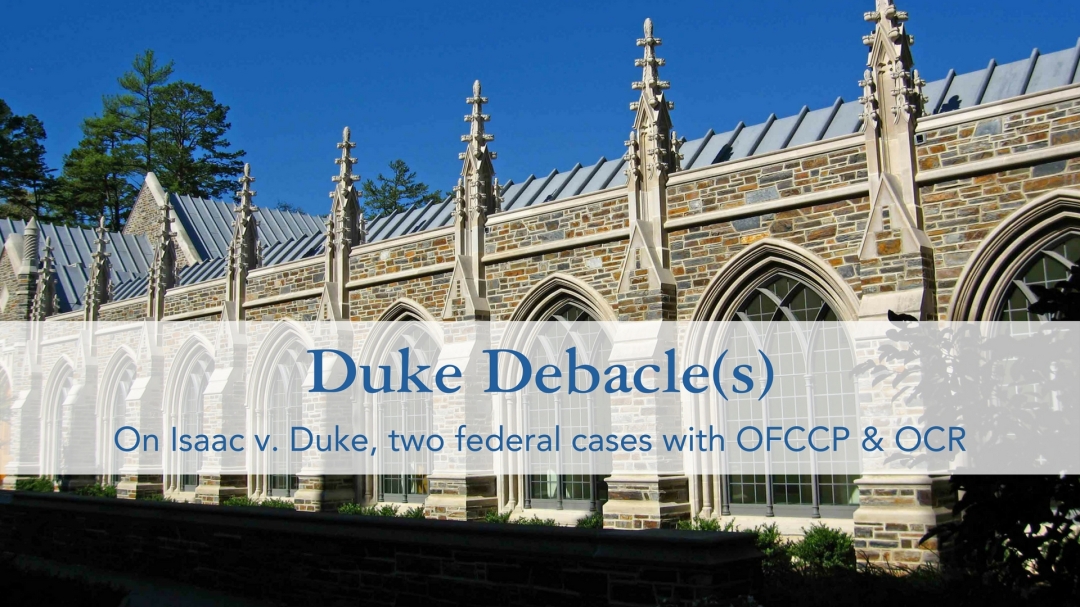 *This post is part of a series on Isaac v. Duke, a federal complaint filed with OFCCP.

This post documents several OFCCP Interviews which suggest the presence or review of counsel retained by the University from the employment law firm Ogletree Deakins.

According to the Federal Contracts Compliance Manual § 2M00.e (p.104) and § 6G03.d-f (p.216), the presence of university counsel implies that a manager has been authorized to speak as and for the university. Non-managerial employees are prohibited in the FCCM from having representative present during OFCCP interviews, unless the relationship is clearly defined, and the employee consents (which then must be recorded in the interview notes).

An attorney interjected for the Associate Dean for Academic Programs three times, in questions 10k, 14, and 20. Question 20 looks very much like the attorney “spoke for” the interviewee, which is expressly prohibited by the FCCM, but the compliance officer did not object at any time then or since. Here is how it appears in the transcript;

Furthermore, question 26 contains a statement which contains no quotation marks or reference to an attorney comment, but which could not have come from the mouth of the Academic Dean himself.

The Academic Dean never provided any such position statement; it was sent  directly to OFCCP by the University’s attorney, who was present at the interview and who has spoken for the interviewee. The Academic Dean had no reason to know OFCCP had been sent a position statement, and the only person who could answer in the manner above both truthfully and accurately is the attorney retained by Duke University. The lack of quotations indicate that legal representation literally spoke for an interviewee in a federal investigation.

An attorney ‘clarified’ the response of Interim Divinity Dean and Professor of Bible and Practical Theology in question 17, suggesting there was representation present.

An attorney objected to a question posed to the Associate Dean of External Relations, remarking that they disputed facts about Isaac’s allegations. This may or may not qualify as ‘influencing or correcting’ an interviewee, but it does seem important to point out that there were no facts contained in the questions themselves. In other words, the questions could have stood alone – was the interviewee aware of the allegations, and did that make any recommendations or plans to resolve them (which implies resolving them short of seeing a federal investigation through to completion). Here is that question as it appears in the transcript;