Sometimes silence is unintended, and stories need to be unearthed in order to create justice for a federally protected population (even those whose need for protection is hidden behind a façade of feigned friendship).  Excavating our own history as veterans and as alumni of institutions like Duke revises and augments a master narrative that diminishes the full dignity of military personnel and communities. It counteracts social plagiarism like “stolen valor” and cultural appropriation.

Kathleen Ashley and Veronique Plesch, in an academic volume published by Duke University Press (because of course it comes from the horses mouth) describe “the fundamentally active nature of appropriation” and its linguistic roots;

from the Latin verb appropriare, “to make one’s own,” a combination of “ad, meaning ‘to,’ with the notion of ‘rendering to,’ and proprius, ‘own or personal.’” Beyond the simple acknowledgment of borrowing or influence, what the concept of appropriation stresses is, above all, the motivation for the appropriation: to gain power over.[1]

In their essay, they draw inspiration from Craig Owen’s “Representation, Appropriation, and Power,” published in 1982. For Owen, appropriation within “a humanistic discipline” like theology, for example, implies 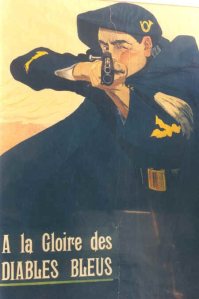 On September 28, 1921, an article in the school newspaper, The Trinity Chronicle, began soliciting responses to the question “What name shall represent Trinity?” The school’s dark blue colors made returning WWI veterans think of a French alpine unit known as les Diables Bleus, or ‘the blue devils.’ The graduating class of 1923 “had been the first post-war freshmen and the student body was full of returning veterans” who would have fought alongside les Diables bleus in the European theater. Their distinctive blue capes were unique amidst the otherwise earthen color tones normally found in military attire and the unit had also been widely recognized for bravery. The article explained the need for a name to match the mascots and nicknames of other college men. Dissatisfied with the simple term “Methodists,” students desired “something… that shall be our own possession.” (p.2, middle column, third of the way down)

This sentiment is still very much alive, 96 years later. In 2014, after the “Faculty Panel on War,” one panelist tweeted something that reflects not just symbolic appropriation, but epistemological appropriation; a tenured professor attempted, however unwittingly, to not just steal military culture, but to even claim credibility belonging properly to soldiers and veterans themselves. Here is her tweet;

Implicit in the message to the left is that soldier’s stories and experience are owned (or more properly ‘known’) by agents external to the soldier. As Jodi Simon, a lawyer in California, stated about Sergeant First Class Jeffrey Sarver’s defamation lawsuit against the crew behind The Hurt Locker, “soldiers don’t have privacy.” Likewise, this tenured professor’s comment becomes an assertion of ownership; she suggests individual martial experience belongs to an entity other than that individual. The words and actions surrounding the panel represents an appropriation of the experience of military personnel as “something… that shall be our own possession.”

This forcible pluralization of the first person dependent possessive form (“my” knowledge to “our” knowledge) is a derogatory assertion of ownership or propriety; i.e. this knowledge is not, or should not, be properly possessed by “combat vets” themselves, for that would be “not good for vets”. “Our,” in this case, displays the standard pacifist justification of credibility regarding any event about “war” which invites participation by “academic[s]” whose expertise derives exclusively from having “written about” a subject with which they have no “first hand” experience. (Panel transcript, p.10)

As for the university, there is no evidence that any student or staff was ever in contact with les Diables Bleus. The Duke Blue Devil logo and branding continues to appear with their distinctive blue cape, and a student recently found that the university has trademarked the (English) words “Blue Devils.” Continuing to use a military unit’s distinctive dress when the military is treated in the ways Duke has represents to many veterans a kind of unjust appropriation which contrasts sharply with Duke’s moral and legal responsibilities to the military community. After all, ownership is nine tenths of the law.

But more importantly, appropriation like this silences and erases the contribution of  veterans in higher education. When told about les Diables Bleu, none of the students in my Virtues of War course had any idea. As graduating seniors, they have absorbed Duke culture and imagery for four years, time in which the experience of veterans on campus has been excluded and editorialized away. I refuse to be silent about the community and culture to which I belong.